How ITS is Creating a College to Career Pipeline for Students

The University of California, Riverside is focused on expanding diversity on campus and providing opportunities to students. As part of this mission, the University has supported students to advance their skills and gain experience within their desired fields by working in different departments on campus. The Information Technology Solutions (ITS) department strongly believes in this mission and has hired students to support various functions within ITS. While the department has given students opportunities to enhance their skills and build experience with projects, the student workers have also contributed to ITS with their creative approaches and unique perspectives, making ITS an even better organization.

There are seven divisions within the organization, each responsible for a specific scope of IT functions that serve UCR. One division, Campus Support & Assessment, is committed to bringing the latest technology to students. According to Sharon Kidwell, the ITS Student Labs and Learning Systems Coordinator, her student workers, along with the team under Campus Helpdesk and Endpoint Support Manager, Phyllis Franco, can be described as the “front-facing arm of ITS.” They manage the laptop kiosks and campus computer labs, provide help desk support, and take on various technology upgrade projects.

With the pandemic obstructing students' ability to come to campus, her team has also worked on creating a virtual computer lab that allows students to access expensive software such as ArcGIS, JMP, and Wolfram Alpha, for their classes.

Tamela Bow, ITS Executive Operations Coordinator, and her team of student workers provide operational support to over 130 staff. Bow says her student workers contribute to the success of the organization by providing support to the administrative team, ideas on improvements, and feedback on the latest projects. They would also help coordinate events hosted by ITS. For instance, before the COVID-19 pandemic, ITS would have a monthly meeting to stay connected with different departments. With the help of the student workers and their ideas for planning the event, they were able to execute these meetings smoothly.

ITS is always taking on new initiatives to make the UCR campus more reliable. According to Bow, with the help of their student workers’ advice, the department is able to gain “a fresh perspective on student engagement.” A recent initiative presented by ITS called the MFA, or Multi-Factor Authentication, was released to help students have more security while using UCR software. By using the student workers’ advice, the app became more user-friendly to students. Thanks to their input, the ITS department has made significant technological improvements on campus for students.

Students Working During a Pandemic 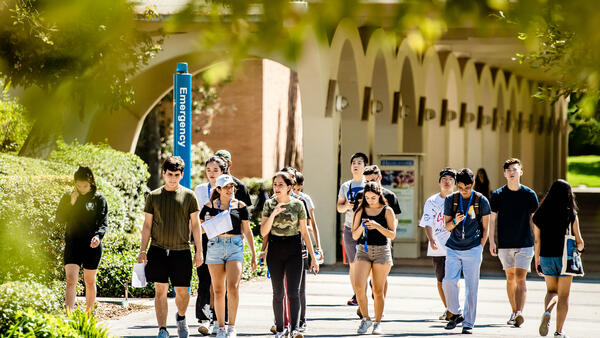 Student workers are hired to help with different IT functions and projects. In addition to helping ITS serve campus, these tasks present an opportunity for student workers with like-minded academic interests to learn new skills and hands-on experience and apply this knowledge to jobs within their field upon graduation. One of the ITS student workers, Van Truong, is a student majoring in computer science and serves as a ServiceNow Administrator Intern for the IT Service Management team. Her responsibilities include monitoring and assessing requests from users (students, staff, faculty), as well as developing request forms in the ServiceNow platform.

Due to the pandemic, student work at ITS looks vastly different. For Truong, even though her responsibilities have not changed, she works completely remotely. This means she has had to learn and build relationships with her supervisor and team members in a virtual environment. However, Truong welcomes the challenge.

"I feel more comfortable working in a remote environment because I feel I have easy access to available resources and communication with the team,” said Truong.

While some students kept their original roles and tasks, some were asked to take on different responsibilities in the wake of campus closure. Another student worker, Gerardo Michel, works as one of the Lead Lab Consultants in Student Technology Support. When the labs were open, his main tasks were to oversee student labs, provide support to students, and perform basic maintenance on UCR’s Wepa printers. As a lead, he was also given additional responsibilities such as creating and updating Knowledge Base (KB) articles. When the campus went remote, his responsibilities shifted to supporting ITS Bearhelp with phone calls and tickets. While this pandemic has limited his role as a lead lab consultant, he has used his new duties to learn and grow in skills he can apply to a future career.

A Benefit to Students

ITS’ initiative to create a college-to-career pipeline for UCR students has benefited both managers and students. Students gain real work experience in a fast-paced, customer-focused environment that they can apply to their future careers.

ITS student worker Thomas Carrillo is a computer science major. While he is proficient in using a computer, he has had trouble speaking publicly and being more social. According to Thomas, he was “very nervous having to assist anyone and afraid of not being able to resolve the issue.” However, he was able to improve because of his position as a student tech support worker. As he helps students over the phone with their technical difficulties, Thomas says that “the experience of interacting with people has helped [him] become more social.” After being with ITS for about a year, he has become less prone to making mistakes and has become more confident in himself.

Another student, Gerardo Michel, hopes to pursue a career in becoming a clinical psychologist. While it may not seem like ITS has any connection to psychology, he was able to improve his customer service skills.

“Having the ability to actively listen to a customer’s problems, work together with them to identify a solution, and guide them through the process of resolving their issues are vital components of my future career,” said Michel. This speaks to the dynamic skillsets and services embodied by ITS and the valuable work experience the organization offers UCR students.

A Benefit to ITS

Just as the students have continued to learn new skills and gain real-world experience, ITS supervisors have also learned a lot from their employees.

Kim King, Service Management Associate Director, has mentioned that their work has become more useful to campus because of their student worker. For instance, when her team was redesigning an aspect of the UCR portal, they wanted to make sure every student was using it and accessing the various sources. With the help of her student worker, she was able to see the project through the “lens of a student,” and identify areas of improvement. She also said her student worker was able to keep the team motivated and “recharged” with their questions and enthusiastic energy. Kim is one of the many supervisors within ITS that has learned from her employees. While the supervisors are responsible for developing their student workers, student workers encourage a learning environment that allows all team members to grow personally and professionally.

The Information Technology Solutions (ITS) department at UCR welcomes students who are interested in gaining applicable, hands-on experience in their desired field. Students do not need to be interested in IT to leave with valuable workforce skills that are applicable in any profession. As student workers develop and gain experience, they also bring current academic knowledge and enthusiasm to various projects and, in turn, help ITS succeed. Creating an effective college-to-career pipeline for UCR students is important to ITS, and the organization aspires to create more opportunities for students in the future.