HRMS is now a 6-in-1 Human Resources Solution

It has been over a year since the Human Resources Management System (HRMS) portal went live, and the 5-in-1 software is a success with its users. Thanks to the software’s high performance, a new module called Contract Out was deployed on February 1, 2022. The new module enforces rules around hiring contract employees, allowing for a more automated process that helps ensure UC Riverside is in compliance with UCOP policy.

“We were able to develop and deploy this new module in record time because there were no reported problems with HRMS in its first year of use,” said Disha Kibria, Associate Director of HR/APO Systems. “That speaks to the success of the software—its agility and scalability.”

The new Contract Out module routes information according to policy, which not only allows UC Riverside to stay in compliance with UCOP reporting requirements but also helps the University better manage its finances and ensure consistent hiring practices.

“Contract Out was developed using the standard HRMS architecture, which means that there is no learning curve to existing HRMS users [in terms of user interface] because it functions and navigates the same way as the other HRMS modules,” said Kibria. “The success of HRMS shows us that application consolidation is possible and a viable path forward for many other UCR processes.”

HRMS has been praised for its benefits to both UCR and its staff by providing reduced operational costs and a centralized, consistent user experience. Having all six modules within the same architecture streamlines and simplifies the entire HR process. 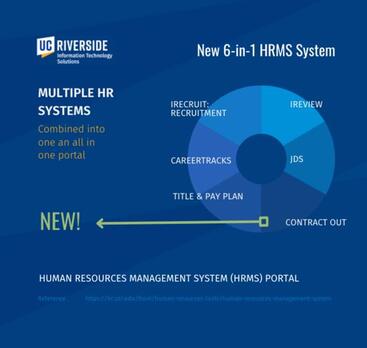 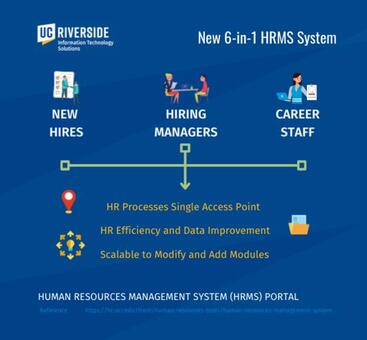